Even before its first 27 nursing students begin classwork this month or conduct their first clinical round later this year, Reinhardt University nurses will now and forever be known as students, later graduates, of the Dr. John A. Cauble School of Nursing and Health Sciences. 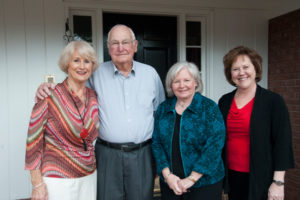 Dr. Cauble, a longtime, highly regarded Canton physician who practiced family medicine for more than 40 years, and his daughter, Sally Forest, have made a lead gift that will support operations, scholarships, and the growth and development of this, the sixth School at Reinhardt University.

“Few people in Cherokee County are more respected than Dr. Jack Cauble. All of us at Reinhardt are thrilled that he and Sally are making possible the naming of the Dr. John A. Cauble School of Nursing and Health Sciences, and we are hopeful that this lead gift will encourage additional support for this exciting, one-of-a-kind nursing program,” said Reinhardt President Dr. Kina S. Mallard.

The gift from the Cauble family provides for immediate operational support and creation of new scholarships in support of nursing students. It may also provide for support of a planned new nursing building on the Reinhardt University campus in Waleska. Currently, the nursing program is located on the Appalachian Campus of Chattahoochee Technical College in Jasper.

Dr. Cauble is providing the lead gift for the Cauble School of Nursing & Health Sciences, knowing that students need and deserve the best program for instruction, facilities and scholarship support as they pursue their dream of becoming nurses for the 21st Century.

“Reinhardt’s decision to establish a School of Nursing is certainly a timely one, for the medical community at this time does not have enough qualified nurses to meet demand,” Dr. Cauble said. “Furthermore, within the near future, demand for their services will be increased as a result of population growth and because more and more primary medical care will gradually but steadily be provided by these nurses.”

Dr. Cauble chose Reinhardt University for such a transformational gift because he sees what the institution is doing for the community for which he provided medical care for decades.

“I thought it was a great place for me to contribute something. Reinhardt has grown a great deal, and I would like to see them grow and graduate more students throughout the years,” he said.

His daughter, Sally Forest, now of Ellijay, grew up in Canton and also has witnessed what Reinhardt is doing for the community. When her father began talking about making a gift to Reinhardt, she strongly supported him.

“I thought the nursing school they are starting was a perfect fit for him having been a doctor for so many years,” she said. “It’s right there in the community where I grew up. They have done so much for the community.”

Dr. Cauble served as a general practitioner in Canton for more than 40 years, providing medical care to thousands of people in Cherokee County. He first practiced alongside another notable Cherokee County physician, Dr. William Nichols, and later opened a solo practice from which he served patients for 25 years.

Dr. Cauble attended Oxford College of Emory University and Emory School of Medicine where he received his Doctorate in Medicine in 1954. Before starting his 40-year practice of medicine, he served in the U.S. Army.

“All of us associated with the founding of this new school, are extremely grateful to Dr. Cauble for his service to this community, and as a professional nurse, I am thankful for his recognition of nursing and the collegial relationships of the multidisciplinary healthcare team,” said Glynis Blackard, founding dean of the Cauble School. “With this support, Dr. Cauble and his daughter, Sally, are creating a wonderful legacy for all of us associated with the formation of this new school.”