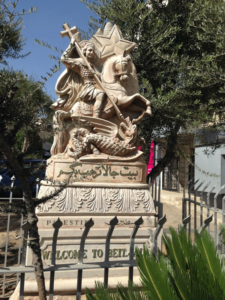 Photo provided by Dr. Jonathan Good. A statue of St. George and the dragon welcoming visitors to Beit Jala.

Time away to rejuvenate and reflect has professors returning to students and colleagues with renewed energy for academia and teaching. Drs. Jonathan and Anne Good – each granted sabbatical leave for a semester in 2017-18 – enjoyed their own path toward the end goal: expanding their knowledge to share in the classroom at Reinhardt.

Jonathan Good spent fall 2017 in the Middle East, visiting Turkey, Israel and Egypt. His mission: to study the connections between St. George and al-Khidr.

“The formal reason for my trip to the Middle East was that I wanted to investigate the convergence of the veneration of St. George, the fourth-century Christian soldier and martyr, and that of al-Khidr, the revered Muslim wali. That these two figures have, at certain times and places, been identified with each other, despite the traditional animosity between Christianity and Islam, is remarkable,” said Jonathan Good, as he shared his experiences in “First Floor Tarpley,” the Reinhardt University History Department’s blog.

He also gained information beneficial to his students, incorporating pictures and anecdotes from his travels. Good’s dissertation centered on how St. George became patron saint of England during the 14th and 15th centuries, publishing his book “The Cult of St. George in Medieval England.”

“That the English picked St. George is rather odd, because there’s nothing English about him. If he ever existed, and there’s no proof that he did, he would have been a military captain somewhere in the eastern Roman Empire in the early fourth century, just prior to Constantine, and who was martyred in the Great Persecution of Diocletian,” he said. “From there he became hugely popular, and even experienced some convergence with the Islamic figure of al-Khidr.”

Good additionally worked on a second project, investigating how al-Khidr and St. George were connected.

Anne Good utilized Spring 2018 to dedicate her energy to research and writing.

She focused on revisiting her doctoral dissertation, turning the biographical study and look at the multi-cultural world of colonial South Africa in the early 1700s into a publishable book. She explored the life of Peter Kolb, a German mathematician and astronomer who observed the Cape of Good Hope, South Africa and studied his book “Caput Bonae Spei Hodiernum,” which describes various aspects of the Cape, such as physical environment, politics, social lives and detailed observations on the indigenous Khoikhoi people.

“My family lived in South Africa as part of a German-speaking community and when I discovered Kolb’s original book and several of the translations in the James Ford Bell Library – one of the best rare books libraries in the United States and housed at the University of Minnesota – it just seemed like the perfect fit,” she said.

Good said her break refreshed her spirit, and that having time to think, read and plan made her ready to the return to teaching this fall.

“Often people have the idea that doing research is separate from teaching. It has never been that way for me. I bring stories, methodologies and controversies from my research into the classroom all the time,” said Good. “If I don’t do research, I feel like I’m stagnating, and I have nothing new to say – and that doesn’t make for happy classes. I find that I have returned to Reinhardt with new ideas for the classes I teach currently, as well as ideas for new classes I’d like to teach.”

She said she was grateful for her sabbatical and believes Reinhardt will benefit from faculty taking the opportunity.

“I think that Reinhardt will experience a continuous boost of creativity on many levels now that faculty have the opportunity to apply for sabbaticals as a regular part of their careers here.”