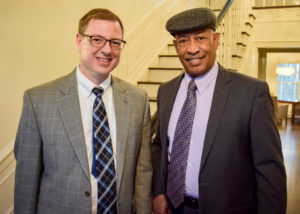 When James T. “Jay” Jordan, Reinhardt’s first black student, visited campus to give a speech on Feb. 18, 2016, Dr. Ken Wheeler was intrigued. Like any curious scholar, Wheeler’s intrigue led to further investigation into the rest of the story, which ultimately resulted in the creation of an interdisciplinary course in fall 2017.

Prior to that fall, the only substantial historical scholarship on the topic was the unpublished memoir of J. Rowland Burgess, a former president of the University.

The results of their coursework and research were compiled into an essay, “Black Student Experiences in the Racial Integration of Reinhardt College, 1966-1972,” that is forthcoming in the February/March 2019 issue of Georgia Historical Quarterly.

With the fruits of their labor in hand, Wheeler began to pursue publication.

“One thing we discovered when we thought about why our research mattered is that most work on segregation and integration of higher education focuses exclusively on large public schools, such as the University of Georgia or Ole Miss,” Wheeler said. “Very little is written about what happened at smaller schools. We thought there was a story to tell, that historians would appreciate, about how integration reshaped student culture and campus life, and the kind of education students obtained as a result.”

“Reinhardt has been offering a meaningful education for a long time,” said Wheeler. “We have a great story to tell about what this school has been in the past, and the opportunities we offer students today.”

Wheeler and his students are proud to not only have contributed to the study of integration in small schools, but also to have finished writing the story of Reinhardt’s integration that Jay Jordan began in 1966.

Georgia Historical Quarterly is available online at GeorgiaHistory.com or by visiting your local public library.