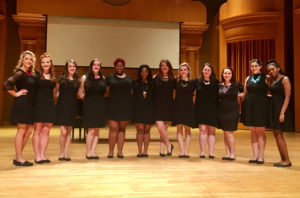 For their last concert with the group they founded, Natalie Beaty and Laura Sellers wanted to go big. Using connections from their curriculum studies, not only were the junior music education majors able to put on a sell-out performance in Flint Hall at the Falany Performing Arts Center, they also were able to raise about $800 for the Children’s Haven.

The ‘Hardt Breakers, the student-run all female a cappella group, filled the 350-seat Flint Hall Friday night with a free admission concert – while vases out front collected donations for the Children’s Haven.

“I’ve been observing for my education course,” Beaty said of being in class with Joe Salter, choir teacher at Dean Rusk Middle School. “They were singing one of the same songs we were singing, and middle school is such a prime time to impact students with music. It’s a good time to connect with other singers and keep them in choir in high school and get them excited about music.”

The 29 eighth graders from Mr. Salter’s chorus class joined The ‘Hardt Breakers on stage for individual groups songs and a collaboration of the middle school and college students.

The middle-schoolers and college students put on show that garnered cheers from the crowd in attendance. The Dean Rusk boys opened the show with Ben E. King’s “Stand by Me,” and the girls sang Miley Cyrus’ “The Climb” a cappella. All the singers collaborated on America Author’s “Best Day of My Life.” 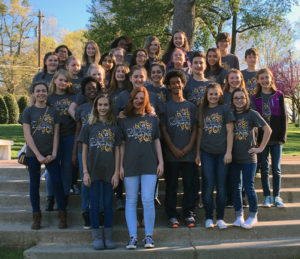 Last Friday’s concert was more than a show – it had a greater meaning for Beaty, Sellers and the rest of their ‘Hardt Breakers family. When they decided to raise money for a local charity, they were not sure what organization. An internet search revealed The Children’s Haven, and Beaty said she did not realize what the children right here in Cherokee County were going through.

“We went on their website, and it hit home. These kids are here in Cherokee County. I grew up here, and I had no idea that this was happening here,” Beaty said. “We were really excited to support such a great cause. We are excited about what the future holds.”

Deidre Hollands, executive director of The Children’s Haven, spoke Friday night to thank everyone for their donations. She gave a brief introduction to the organization and what it does.

“Children in foster care are just like any other child you may know. They have the same dreams, the same potential, needs same hopes and dreams, the same unique potential all kids have,” Hollands said. “The trauma of abuse can be extremely disruptive and challenging for children. We envision a community where every child has the opportunity and support to fulfill their potential, pursue their dreams and become productive members of their communities. On behalf of the 300 children that we serve each year, thank you for your donations tonight.”

After the show closed, everyone gathered for a reception with donated food by Zaxby’s, Publix and Kroger.