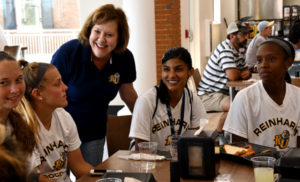 As it celebrates its 135th year, Reinhardt University is seeing one of its best years yet in growth, academics and more.

The University also recently honored its 106 Eagle Scholar athletes – the student-athletes who accomplished a 3.75 GPA during spring semester 2018.

“Reinhardt is on the rise,” said President Kina S. Mallard. “As President, it is most encouraging to see our students succeeding in the classroom, and to welcome new students who are prepared to thrive here as a result of their academic accomplishments prior to coming to Reinhardt.” 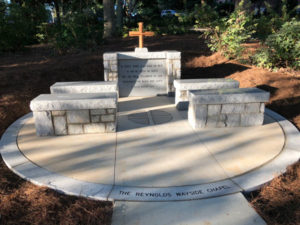 Students have a place to stop and reflect just outside of the Burgess Arboretum on campus thanks to architect Garland Reynolds who donated the Reynolds Wayside Chapel. Photo by Jordan Beach

With generous support from Board of Trustees Chairman Ken White, gift new carpet was installed in the Lawson and Tarpley academic building hallways, and a downstairs room in Hill Freeman Library & Spruill Learning Center is being renovated as a faculty lounge and meeting room. Later this fall, two classrooms in Lawson will be completely renovated thanks to the generosity of the Alumni Board of Governors who raised more than $18,000 for this project.

Other campus additions include Simms Garden, which will soon accommodate outdoor dining tables to enhance the Gordy Dining Center experience. The garden is named for Trustee Nancy Simms and her husband, Steve, who made a generous gift in support of the Gordy’s expansion and renovation. The garden is representative of a family legacy. Mrs. Simms is the daughter of Frank and Evelyn Gordy, for whom the Gordy Dining Center and Gordy Hospitality House are named.

Students also will notice a small chapel for a stop along the Burgess Arboretum. Garland Reynolds, architect for many buildings on campus, gifted the University the Reynolds Wayside Chapel, located along the walking path between Hill Freeman Library & Spruill Learning Center and Hasty Student Life Center.