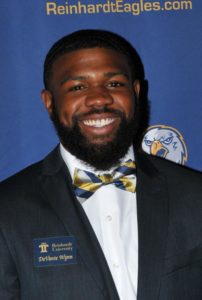 DeVante Wynn ‘16 came to Reinhardt University six years ago to be a part of the launch of Reinhardt’s football program, but he never imagined what the next six years would bring.

New football team, he had no intention of staying for more than two years, but Reinhardt captured his heart and he found a place to call home.

Wynn, a 2016 graduate of the Price School of Education with a degree in Sports Administration and a business minor, celebrated his second commencement ceremony on the field where he played outside linebacker earning his Master of Business Administration degree on May 4.

“I originally came to RU back in 2012 with the same thought process as about 130 other young men, ‘I’ll play football here for two years, get some film, and then transfer to a bigger school,’” Wynn said.

“However, after spending the first semester on campus, I knew this was a place that I was going to stay because it felt like home. I enjoy everything about the institution – the beautiful campus, the people of the university, the sense of family between students and, of course, our successful athletic programs.”

Wynn quickly found his place on campus, playing football and getting involved with D.R.E.A.M.S., a pro-diversity group on Reinhardt’s campus that focuses on social and cultural inclusion and creating an understanding among all students and people of the community.

“As a student, I was heavily involved with the athletic department, especially the football program and was a member of D.R.E.A.M.S. Reinhardt gave me an opportunity to play college football, earn two degrees, and start my career in my preferred field,” he said. “I am grateful and a true personification of the old slogan ‘It began at Reinhardt…’”

Arriving at Reinhardt with the plan of getting some credits and film for football turned into an experience that Wynn says have helped him develop as a productive citizen and successful professional.

“The everyday interactions between students, faculty and staff of different backgrounds have helped me develop my social skills. The diversity of our community has allowed me to acknowledge and respect the differences between the many cultures we encounter on a daily basis,” Wynn said. “The courses I took as I was obtaining my degrees gave me practical knowledge of the industries that I am interested in. Not only have I done projects and presentations that will assist me as an athletic administrator, but I have developed the skills as a businessman to generate revenue for an organization.”

Wynn is continuing his path in the athletics department with goals of becoming an athletic director and impacting youth through sports.

“I have tons of goals and plans for my future but they all involve changing lives through sports,” he said. “Five years from now, I plan to be an athletic director at a college or large high school as I work to develop my own business geared toward the development of young men from the urban community, both athletically and as productive citizens.

Reinhardt University Athletic Director Bill Popp had nothing but glowing things to say about Wynn and said Reinhardt is fortunate to share in the next phase of his career.

“DeVante Wynn is what all of us hope our children turn out to be like. He is dedicated to his craft weather that is football, academics, or supporting all of the teams at Reinhardt in his role as Operations Coordinator,” Popp said. “He continues to prove that if you have strong values and character combined with plans and goals the sky is the limit.”