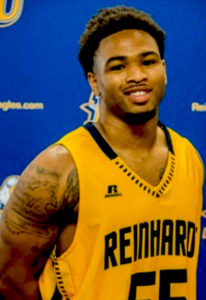 While at Reinhardt University, Treval-Alden Sullivan ‘18 spent much of his time on the basketball court. Now he is applying his degree, a Bachelor of Science in Mathematics, in his career as a base field engineer and in a role assisting as a financial accountant.

Sullivan majored in mathematics to use as a base field for engineering – the courses cover many areas he would need for his career. He was hired at Duluth-based Keck and Wood, an engineering consulting firm, as a civil engineer in the transportation section.

“I found out about this position my junior year at Reinhardt and applied for an internship at the firm when the position opened, and I have been working here ever since,” Sullivan said.

He hopes to further his education by earning a master’s degree in civil engineering. His future, he hopes, also includes beginning a structural field in the engineering department at Keck and Wood.

The student-athlete believes his well-rounded education at Reinhardt equipped him for the work he does every day.

“Every class I’ve taken at Reinhardt has in some way prepared me for the career I have now,” said Sullivan. “From the communication classes all the way to my major, such as physics and math classes, a little piece of knowledge from every course is used in my everyday work life.”

Although his time at the University came to a close, Sullivan will always have his favorite aspects of his college experience to remember, which included playing basketball and the “forever friendships and relationships” he gained.

“From playing basketball at Reinhardt, I learned that just because some people do not share the same blood as you, doesn’t mean they can’t become family,” he said.