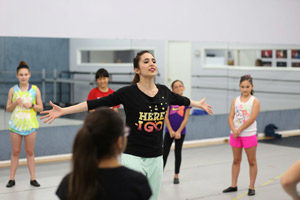 Broadway and television star Gabrielle Ruiz is coming to Reinhardt University’s Flint Hall to impart her expertise on the School of Performing Arts musical theatre students.

Ruiz has been on Netflix’s “Orange is the New Black” and in “Law & Order: Special Victim’s Unit.” She currently is a series regular on the CW’s “Crazy Ex-Girlfriend.”

“Gabrielle was my voice student at Oklahoma City University. She graduated in 2007, and had performed in a couple of Broadway shows prior to her first visit to Reinhardt in 2013,” said Dr. Rebecca Salter, associate professor of music – applied voice. “Since then, her career has taken off. She currently lives in Los Angeles and is a series regular in ‘Crazy Ex-Girlfriend,’ a comedic musical theatre-style television show. We are thrilled to have her back for another dance master class.”

Ruiz will be teaching skills students need for television roles.

“I will be teaching an acting and dancing class for television. The college students will learn how to pick up choreography specifically made for television while simultaneously learning to lip-sync the lyrics,” Ruiz said. “We will also be having a Q&A session where the students can learn about me, my career and ask any questions they would like to know about show business.”

The class will be taught Tuesday, Feb. 28 from 2-4 p.m. in Flint Hall at the Falany Performing Arts Center. While the class is only for RU musical theatre students, Salter said anyone is welcome to come watch.

Ruiz said she is thrilled to be coming to Georgia to work with students at Reinhardt, and she remembers what it was like learning the ropes.

“It is important to me that these musical theatre students have a connection with an actor who studied and had dreams just like them at their age,” Ruiz said. “Not only do I hope they enjoy my class, but I look forward to making a long-lasting connection with them as they continue pursuing this difficult yet rewarding path of being a professional performer.”

Ruiz’s career has blossomed including roles on Broadway in “If/Then,” “Evita, “In the Heights” and the role of Diana Morales in the First National Broadway Tour of “A Chorus Line.”

She also has been featured in InStyle magazine and Vanity Fair. Catch up on “My Crazy Ex-Girlfriend” on Netflix.